We are very excited to announce the launch of our newly designed liverpool local website. Visit the new site at www.s-norton-liverpool.com.  We wanted to make the new liverpool website speedy, easier to navigate and user-friendly.

Our goal with this new website is to provide our suppliers a simple way to learn about S. NORTON’s services and site information. The new website gives easy access to sections including Sell to us, What We Buy, About Us, Find Us.

Our current and prospective clients will find useful information about our services as well as practical information such as site PPE requirements and information on payment options. 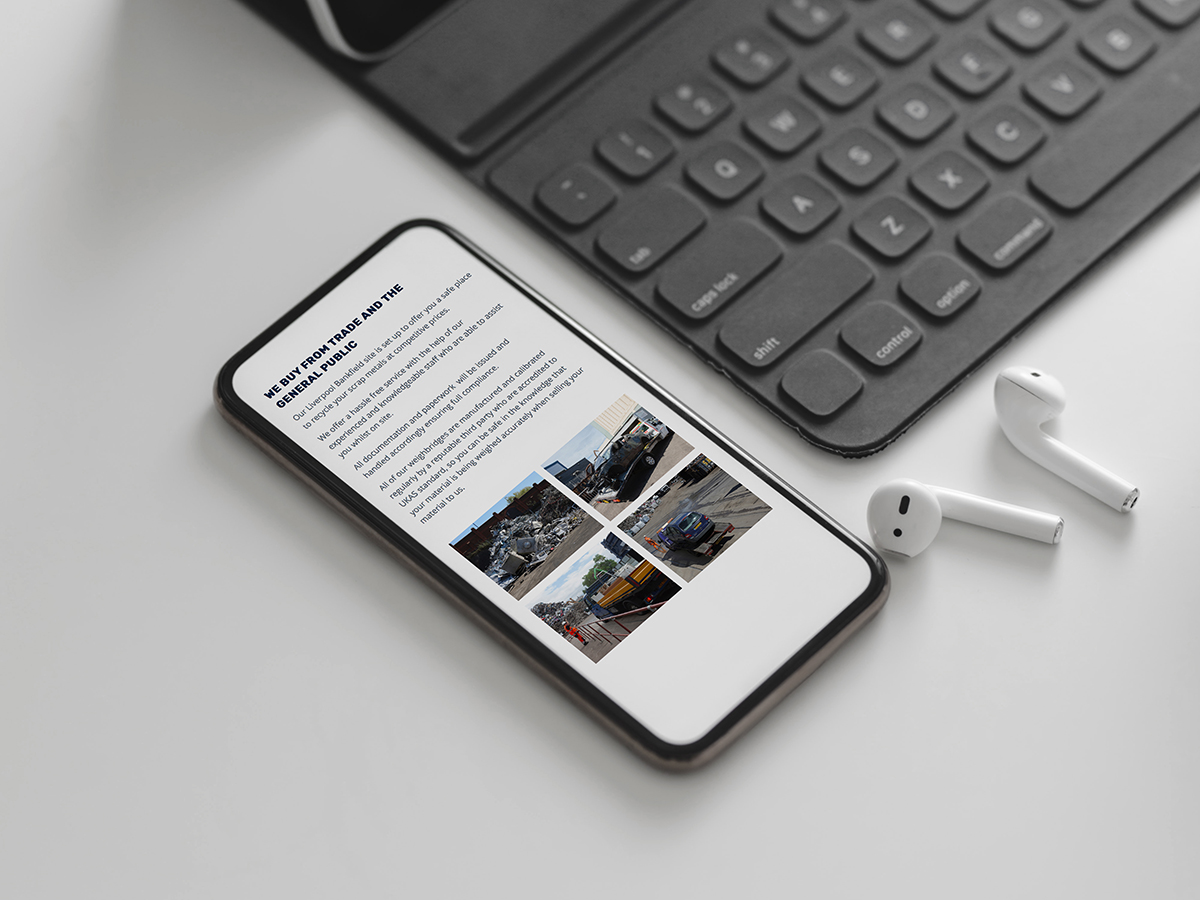 S Norton has prioritised investment in new materials handling equipment and supporting its independent customer base after reporting a healthy return to profitability in its latest published accounts for 2016.

New cranes are arriving at Barking as part of a £10 million overall investment programme in efficiency and capacity at their London site. Similar investments are also planned over the coming months across the Group’s Liverpool, Manchester and Southampton sites.

Robust performance over the past 12 months has put the Group into an ‘excellent position’ to push forward with their five-year plan aimed at driving future growth and enhancing service to its independent scrap producer partners, according to Chairman John Norton.

He says: “As a strong and forward-looking company, we are investing for the long term by making each of our four sites even more efficient and productive, enabling us to offer our valued suppliers competitive prices and fast payment terms.”

“Having built long-standing relationships based on trust with independent scrap merchants and industrial scrap producers across the UK, we are maintaining our focus on supporting and strengthening these partnerships as we move forward,” continued John.

Charlie Norton, Purchasing Director, commented: “Our business is built on the trust shown and received from independent suppliers around the country. We value their loyalty and this is a key attribute upon which we will always strive to build and maintain in the interests of all parties.”

Charlie continued: “‘We are seeing increasing numbers of suppliers being attracted to our Barking and Southampton sites, where we can offer rapid turnaround and competitive prices because we are able to export direct from these sites by sea. In the Midlands we are offering road collection services direct from supplier yards to our Liverpool export site.”

He added: “In supporting the independent operators with prompt payment and friendly customer service, they in turn can thrive and prosper.”

Teamwork between S. Norton and its customer AR Demolition successfully completed the demolition and clearance of a redundant processing plant at a remote granite quarry on the west coast of Scotland.

S. Norton provided specialist support for the Midlands demolition company in processing and transporting more than 1,500 tonnes of scrap steel by boat from the Glensanda Super Quarry, near Oban.

Significant investment in upgrading and constructing new facilities by the quarry owner Aggregate Industries had left a former workshop, crusher house, conveyor system and ‘glory hole’ building earmarked for demolition. With huge reserves on site, the now-redundant structures were preventing progress on further extraction and needed to be removed.

The quarry’s isolated location on the banks of Loch Linnhe meant the only viable access solution for heavy plant and equipment was by barge from the mainland to the quarry port, an hour’s sail away.

The 20-metre high crusher building had housed some very heavy castings that were too large to be dealt with by the excavator-mounted shears. Weighing in excess of 50 tonnes, these required specialist removal and disposal by the AR and S. Norton teams. 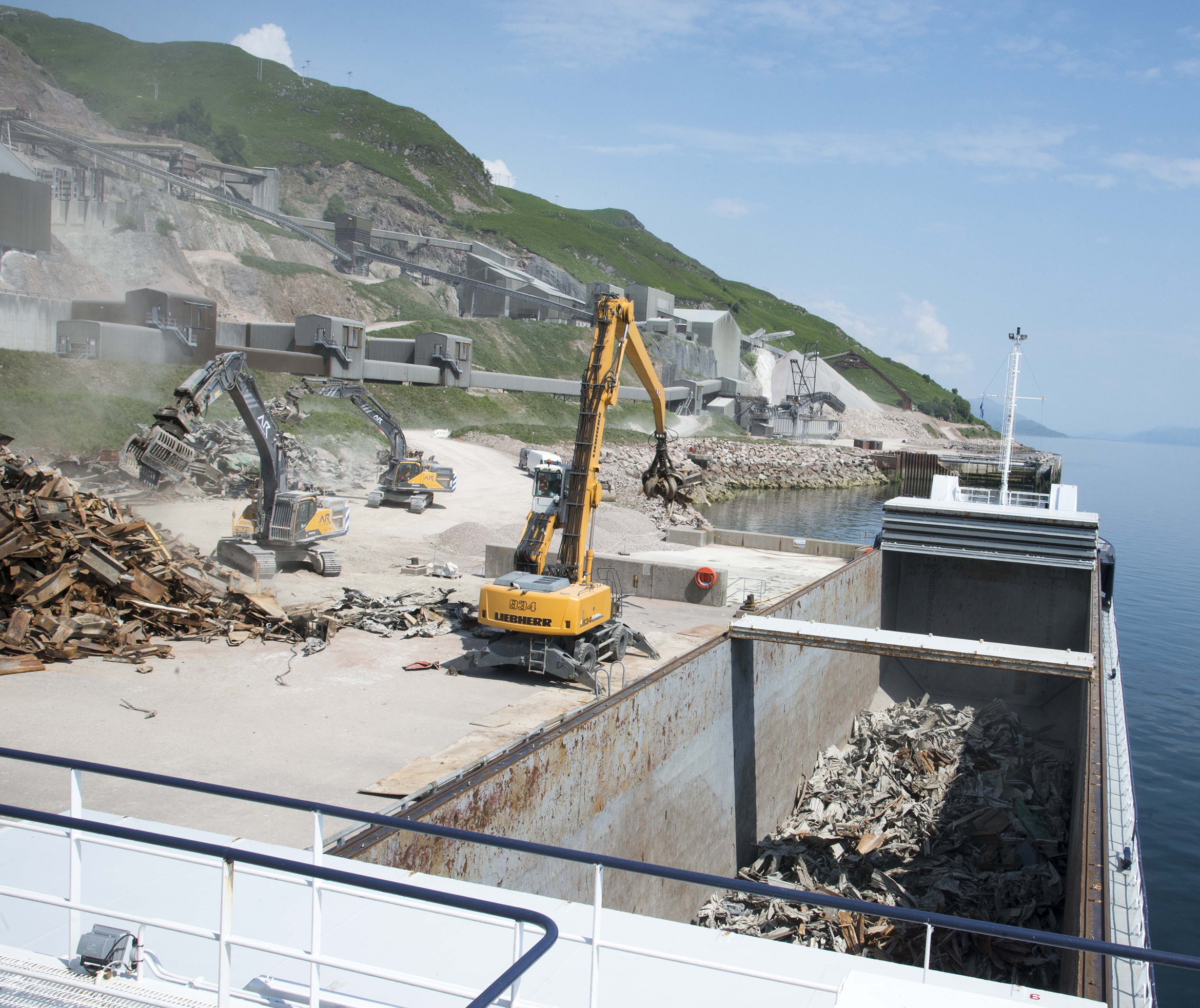 To remove the material from the port, AR Demolition had considered using bulk tippers; however this would have increased the time for the project and massively impacted traffic on the local roads.

Having looked at the alternatives, S. Norton & Co was asked to supply a 3,000-tonne capacity coaster to ship the material to our Liverpool base for further processing. The teams loaded the vessel in under two days.

S. Norton’s Contracts Manager Kenny McKeen explained how we were called in for our specialist expertise in processing scrap and our ability to arrange the vessel to carry it back to Liverpool for subsequent export.

He said: “It was a highly unusual job due to the remoteness and inaccessibility of the site. We sent men with burning equipment and lances who assisted in the processing and loading of the metal and worked as part of AR’s team.

“One of the key challenges was the draft in the bay where the vessel docks and the depth of water was a major consideration, requiring close liaison with the harbourmaster. It was the furthest distance we’d ever sent our men on a project and everything went as smoothly as clockwork!”

Commenting on what had been one of their ‘most complex and challenging projects’ to date, A R Demolition Managing Director Richard Dolman said: “S. Norton’s specialist expertise had been extremely helpful, especially with cutting up the larger pieces of metal that required particular skill. They also provided valuable assistance with loading the freighter they had chartered to transport the scrap metal to Liverpool.”

He added: “The quarry’s remote location presented unusual logistics in that everything had to be transported by water; that made a relatively normal project unusual!” S Norton & Co Ltd has invested more than £10 million in plant, cranage and associated site works to increase efficiency and capacity at its Barking site in London.

One of the UK’s prominent metals recyclers, the family-owned firm has installed a Henschel 1250 pre-compression shear machine at its five-acre export facility in River Road.

With a capacity of 40 tonnes per hour the machine is an addition to the site, which was acquired by S Norton & Co in 2013. Installed at the end of 2016, the machine is now in full production and boosts the yard’s heavy duty scrap processing capacity by 50%. 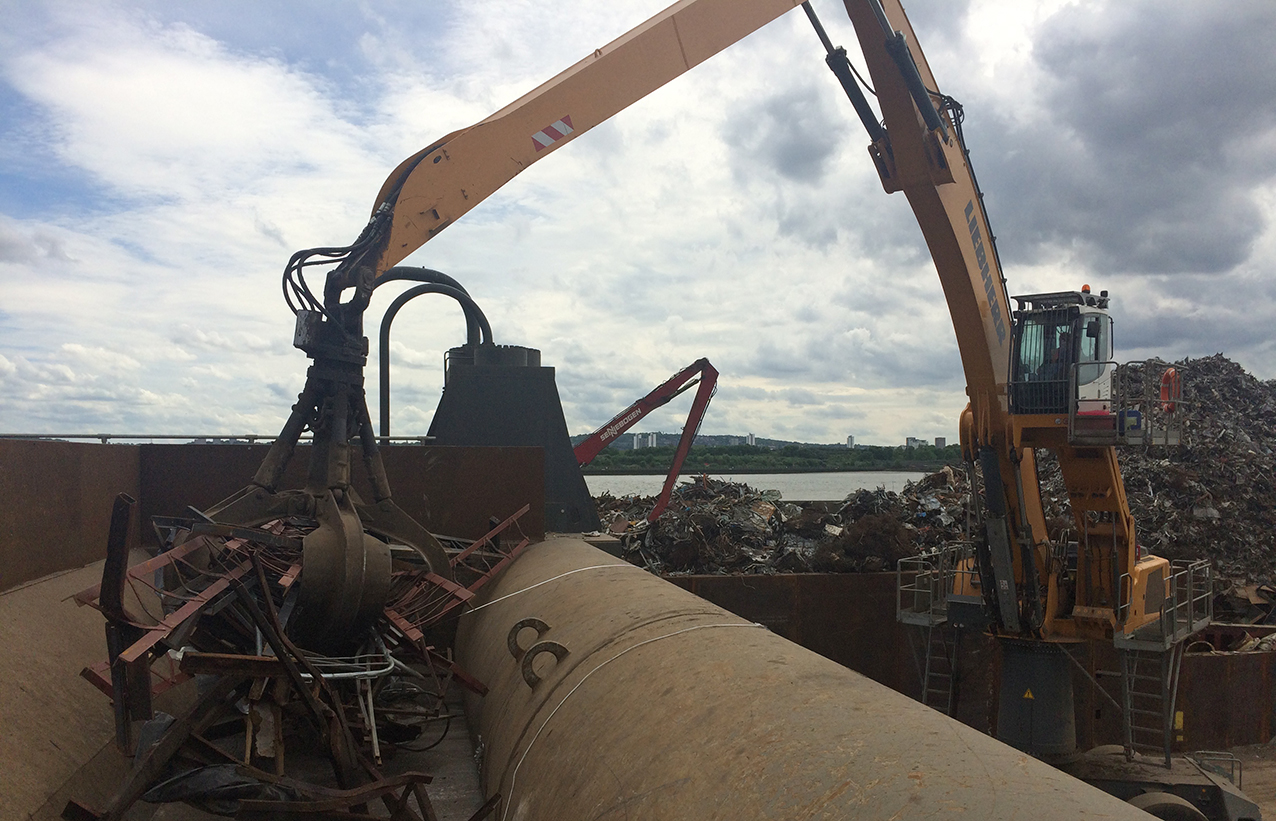 Site Manager at Barking, Micky Duke said: “Our aim is to increase the tonnages through London whilst enabling a quicker turnaround for customer vehicles. This machine with its high pre-compression can create denser material enabling us to maximise cargo stowage for shipping.”

Up to four extra staff will also be recruited to accommodate the new shearing operation as well as the site’s health & safety, environment and maintenance programmes.

S Norton & Co Technical Director Matt Norton commented: “The new Henschel shear machine is a key addition to our Barking site and will make the whole operation more efficient. This large investment in the site also covers some environmental improvements, including firefighting facilities and equipment.”

Consistent investment by S Norton & Co, a family-owned business since the 1960s, has enabled it to stay at the forefront of metal processing throughout the UK.

Other recent investment includes enhanced handling equipment at both its Liverpool and Southampton sites, while continuous processing improvements are maintaining the high quality of finished metallic and non-metallic products for both domestic and overseas customers.

Animal-loving staff at S Norton’s Manchester yard saved a family cat from their scrapyard shredder after the owner alerted them that her pet was missing.

Owner Bekky Barber was unaware her six-year-old cat called Hope had climbed into the engine compartment of her old Citroen Picasso for the 12-mile trip from her home in Wythenshawe to the processing site at Trafford Park.

The cat leapt out when an employee opened the bonnet, giving him the ‘fright of his life’.

Initially Bekky thought the animal was a stray, but later realised it must have been her pet when she got home to find her missing. She called S Norton and employees were asked to look out for Hope. Bekky also called in cat catcher Debra Carter, who laid four traps around the yard.

After seven days of daily checking the traps, our staff found Hope who was a bit ‘oily’, but otherwise unscathed.

Site foreman Chris Bossons commented: “One of the lads was taking details and the cat jumped out when he lifted the bonnet. It scared the life out of him! They were all asked to look out for the black cat and double-check before cars go into the shredder.

“I kept going back to check between jobs. Being animal-lovers here, we’re pleased that Hope is now safe. It’s a nice ending!”

Bekky said: “Two feral cats were caught before they found Hope after a week. She’s great, although she smelled a bit oily and had a chipped claw, but that’s it. It was such a relief.”

She added: “If it wasn’t for Debra and the S Norton lads who co-operated with her, I don’t think I would have got her back.”

“Innovation and ensuring compliance with growing industry regulation will be vital for the future success of the scrap metal recycling sector”, stated S Norton Managing Director, Roger Morton. “Organisations that fail to maintain high standards and invest adequately in their businesses to ensure compliance could be at risk”.

He comments: “Regulation is increasing rapidly and these pressures come from all directions to do the job properly. Our industry is facing more challenging trading conditions and the surviving companies will be those that continue to comply with legislation, innovate and invest in their operations.”

Consistent investment by S Norton & Co, a family-owned business since the 1960s, has enabled it to stay at the forefront of metal processing throughout the UK. Recent investment includes enhanced handling equipment at both its Liverpool and Southampton sites, while continuous processing improvements are maintaining the high quality of finished metallic and non-metallic products for both domestic and overseas customers.

“The increasing non-metallic content and variability of our feed materials is a long-term trend in the industry. Hence the need for an innovative approach to tackle these on-going challenges and to deliver quality products,” continues Roger.

Roger says this partnership allows them to innovate more and take greater technical risk than many other similar companies. It also differentiates S Norton & Co from other recyclers and demonstrates their ability to meet and even exceed recycling targets.

He adds: “Looking ahead, the triggering of Article 50 and Brexit is likely to lead to ‘choppier waters’. As a family business that treats its loyal customers with respect and thinks long-term, we have been and are continuing to invest for the future. While the better businesses will weather the storms, those that innovate will thrive!”

We are very excited to announce the launch of our newly designed liverpool local website. Visit the new site at www.s-norton-liverpool.com.  We wanted to make the new liverpool website speedy, easier to navigate and user-friendly. Our [...]

S Norton has prioritised investment in new materials handling equipment and supporting its independent customer base after reporting a healthy return to profitability in its latest published accounts for 2016. New cranes are arriving at [...]

Teamwork between S. Norton and its customer AR Demolition successfully completed the demolition and clearance of a redundant processing plant at a remote granite quarry on the west coast of Scotland. S. Norton provided [...]

S Norton & Co Ltd has invested more than £10 million in plant, cranage and associated site works to increase efficiency and capacity at its Barking site in London. One of the UK’s prominent metals [...]